T-ZIR and AJE Zaragoza, united in the formation of the retail sector
x
We use own and third party cookies in order to improve our services. Browsing this website implies acceptance of our cookies policy. You may change your setup or obtain more information here.

Driving great ideas to create the retail industry of the future 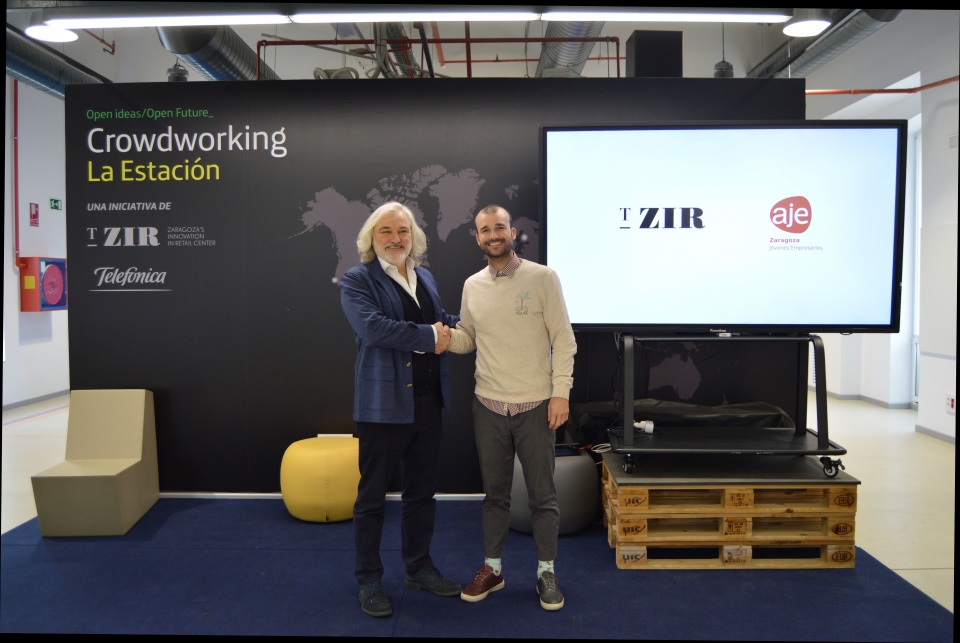 T-ZIR and AJE Zaragoza, united in the formation of the retail sector

The signing of the collaboration agreement between T-ZIR and the Association of Young Entrepreneurs of Zaragoza (AJE Zaragoza) and T-ZIR took place this morning in the offices of this innovation centre located in the building of the former Utrillas Station in Zaragoza. This new topic, retailing, is incorporated into the Development Forums with which AJE Zaragoza seeks to train and inform both its own members and the rest of the associates about different areas. The Development Forums become a free source of knowledge for the rest of the associates about specific interests, in this case about the needs and challenges existing in the world of retail, in which T-ZIR is a reference in innovation and digital transformation.

This is the first agreement signed this year, but not the only one as AJE Zaragoza plans to carry out more in the near future. Pedro Lozano, president of the Zaragoza Young Entrepreneurs Association and Luis Barcelona, managing director of T-ZIR, participated in the signing ceremony of the agreement between AJE Zaragoza and T-ZIR. Both leaders have expressed their interest in promoting the entrepreneurial spirit, supporting the ongoing training of young entrepreneurs and, in short, the dissemination and consolidation of a strong business network in Aragon.

The president of AJE Zaragoza, Pedro Lozano has stressed that the signing of this agreement means "another important boost for the benefit of young entrepreneurs. He also stressed that it establishes "an even stronger bond with T-ZIR, because this centre is a clear example of an entrepreneurial ecosystem in which many of our members have taken part in one way or another in its activities", he said. In this way, "we are able to increase the strength of our objectives for the benefit of entrepreneurs," said Lozano.

Zaragoza's Innovation in Retail Center (T-ZIR), is a center of innovation applied to the entire value chain of the retail sector and focuses its work mainly on the digitalization of urban commerce and technological democratization. It currently develops three main areas of activity: acceleration of startups, with its partner Telefónica Open Future, launch of innovation projects and spinoffs, such as mizesta.com (focused on the digitalization of local food markets) and zerca! (a project that aims to digitally transform urban commerce) and training, a subject that will now be further developed by AJE Zaragoza. With the formalisation of this collaboration agreement, T-ZIR will become the sponsor of the new Development Forum that will deal with everything related to trade and its digitalisation, as well as providing advice on this subject to the associates of AJE Zaragoza.

Luis Barcelona, CEO of T-ZIR, has highlighted that "for T-ZIR this agreement is fundamental from a double perspective: support and commitment to the territory and commitment to open innovation. We are an Aragonese centre with an international vision, which aims to help our entrepreneurs to find bigger and better solutions within the new paradigm of the digital economy. In this collaboration with AJE Zaragoza we hope to find the sum of synergies necessary for young entrepreneurs in our community to access a new ecosystem of digital solutions developed from the local to the global.

The Development Forums are specialised teams made up of businesspeople associated with AJE Zaragoza and led by a coordinator who is an expert in the subject matter of the Forum. During 2019, AJE Zaragoza has carried out multiple Forums that have dealt in depth with a total of 8 current topics, ranging from Data Protection, Digital Transformation to Insurance, Human Resources and Marketing, among others. The signing of this agreement incorporates a new area, such as the retail sector, which will contribute to broadening the knowledge of AJE Zaragoza's members by handing them experts and through a dynamic approach based on their own experiences that will favour the exchange of knowledge and the identification of practical solutions.

ZIR's blog will be available shortly.